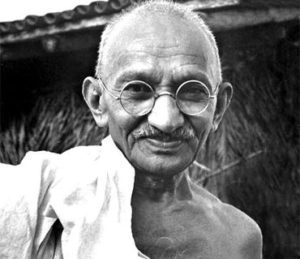 Mahatma Gandhi advocated and practiced brahmacharya (celibacy) as an essential part of satyagraha (truth in action). Satyagraha is the name Gandhi used for his approach to social action, a campaign that ultimately led the British Empire to quit India. It was based on the belief that no alternative strategy was stronger than truth (satya) and it recognized how corruption thrived in the absence of truth. Because sexual politics tends to corrupt social action, Gandhi felt it was important for activists to be above the fray in that regard by positioning themselves apart from sexual manipulation, by celibacy.

The most essential element of Satyagraha is ahimsa (nonviolence). Gandhi’s ethic of ahimsa not only precluded the use of violence, it precluded any kind of force to gain an advantage. Satyagraha let truth take the central role in any situation. Gandhi’s method when confronting an official on an issue was to illuminate the truth of the situation and rely on the official to see the truth in time and relate to it appropriately. There were occasions when Gandhi had a close relationship with a local official’s superior, such that an ordinary political course might be to have the superior overrule the local official on a community matter. But Gandhi would not do that. He felt a problem was best resolved if the officials at the center of the issue could understand the truth of the situation and embrace the correct solution on their own.

This refined concept of nonviolence practiced by Gandhi took Satyagraha out of the sporting aspect of politics, above the hierarchical games and sexual undercurrent, and placed issues on the table with the simple purpose of seeing their reality and acting accordingly. The concept can be related to Buddhist ideas on the nature of suffering or clinging to things incapable of satisfying. The cause of such difficulty is said to be desire, and in Gandhi’s ethic of ahimsa the most problematic desire can be described as the desire for advantage, with himsa being the willingness to use force to gain advantage. Ahimsa, or not-himsa, thus renounces the use force to gain advantage.

Employing political or sexual favors seems to be a common currency of ordinary politics. The notion of political capital reflects the idea of subjective strength in political initiatives. Ahimsa removes the subjective aspect, does not trade in reciprocity or favors, but looks instead to the reality involved in an issue, building responses and solutions simply upon that truth.

Needless to say, Gandhi’s version of ahimsa is largely absent from most politics as usual. Corruption is nourished by illusion, clinging to subjectivity that usually is not capable of satisfying the individuals at play or their community’s needs. The desire for advantage is compelling in that game and a result is suffering