Breathing is the most important part of meditation (and life): from breathing we derive vital energy (known variously as chi [qi], prana, ki, etc.) that permits conscious awareness, balance and movement. 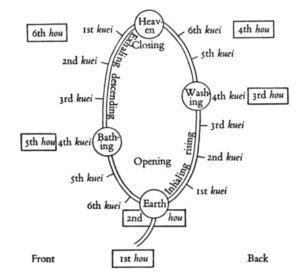 The image to the right, illustrating the internal path of breath energy during inhalation and exhalation, is from Richard Wilhelm’s translation of The Secret of the Golden Flower, with an included translation of The Hui Ming Ching (The Book of Consciousness and Life) a Taoist classic on the circulation of internal energy that says:

The most marvelous effect of the Tao is the circulation in conformity with the law. What makes the movement inexhaustible is the path. What best regulates the speed are the rhythms (kuei). What best determines the number of the exercises is the method of the intervals (hou). …

The holy science takes as a beginning knowing where to stop, and as an end stopping at the highest good.

The right side of the illustrated path depicts energy rising up the back during inhalation (inhalation and exhalation are compared with washing and bathing.) It is reasonable to associate the hou in this image with the chakras of yogic traditions. During inhalation, breath energy rises from the second chakra along the spinal column to the fourth chakra (distinguishable from some yogic traditions that describe energy [kundalini] passing through all of the chakras, from the base of the spine to the top of the head.)

The inhalation phase takes place in a rhythm of six counts, the first four counts involve the breath energy of inhalation rising from the second to the third chakra and in the final two counts energy reaches the fourth chakra.

The left side of the illustration depicts energy descending in front during exhalation, from the sixth chakra to the second chakra, also in a rhythm of six counts. During the first four counts, exhaling breath energy descends from the sixth to the fifth chakra and in the final two counts energy directly reaches the second chakra. This is consistent with the role of the xia dantian in Chinese traditions, a place where the cycle of internal energy circulation is completed.

The book describes rising energy of inhalation along the spine as the energy of control, and descending exhalation energy as the energy of function. In physiological terms, freely moving spinal energy can increase one’s mobility, balance and grace. Functional energy in the front path, the descending energy of exhalation, can be associated with digestion and related internal functions (e.g., heart rate) that may be represented neurologically by the vagus nerve.

There is no direct correlation between Western neurology and Eastern paths of internal energy (such as the meridians of acupuncture or yogic nadis.) However, the spinal cord and the vagus nerve are close enough as analogous approximations for at least part of the illustration above.