The Bhagavad Gita, meaning Song of the Lord (i.e., Lord Krishna), an epic poem of about 700 verses, is part of a larger epic poem known as the Mahabharata.  One of the most important texts in the literature and philosophy of India, the Gita arises within the story of an ancient feud over succession in the Kuru Kingdom.

Rival factions of royal cousins, the Pandavas and the Kauravas, are met on the Kurukshetra battle field.  Arjuna, a champion of the Pandavas, despairs at the prospect of killing his 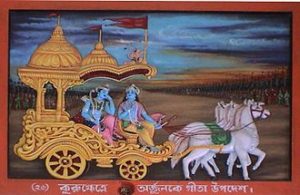 kinsmen and confesses that reluctance to his charioteer and teacher, Krishna.

The Gita recounts a philosophical dialogue between Arjuna and Krishna addressing some fundamental questions on the nature of the Soul (Atman) and how one may attain release from the cycle of birth and death.  Some quotations from the Bhagavad Gita:

Never was there a time when I did not exist, nor you, nor all these kings; nor in the future shall any of us cease to be.

As the embodied soul continuously passes, in this body, from boyhood to youth to old age, the soul similarly passes into another body at death. A sober person is not bewildered by such a change.
(2:12-13)
Neither he who thinks the living entity the slayer nor he who thinks it slain is in knowledge, for the self slays not nor is slain.
For the soul there is neither birth nor death at any time. He has not come into being, does not come into being, and will not come into being. He is unborn, eternal, ever-existing and primeval. He is not slain when the body is slain.
O Pārtha, how can a person who knows that the soul is indestructible, eternal, unborn and immutable kill anyone or cause anyone to kill?
As a person puts on new garments, giving up old ones, the soul similarly accepts new material bodies, giving up the old and useless ones.
(2:19-22)
O [Arjuna,] descendant of Bharata, he who dwells in the body can never be slain. Therefore you need not grieve for any living being.
(2: 30)

A first principle of Hinduism gleaned from the Gita: the true self or soul, the essence of an individual, is beyond identification with phenomena.