Something profound began May 2, 2018, with the appearance of a crack in road pavement in the Leilani Estates subdivision of the lower Puna District, Island of Hawai`i. 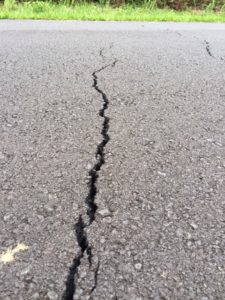 Over several days road cracks, that continued to appear, became fissures that filled and overflowed with slowly moving lava.

Lava, even flowing slowly from a crack in the ground, inspires awe as well as anguish. In the following months, that was the defining experience of most lower Puna residents. People around the world watched on video news as houses, forest and roads were taken permanently into a newly formed landscape created by Kilauea Volcano, home of Pele.

Pele is a Polynesian deity.  Kilauea became her present home as part of her journey across the Pacific. Any volcano deserves respect for the primal reality of its nature: to create while destroying.  Sometimes respect for a profound phenomenon of nature may gravitate toward reverence.

The ongoing eruption, beginning with a crack in a subdivision road, has become a substantial catastrophe for the people of eastern Hawai`i Island.  With wide media coverage around the world, there is shared mutual regret for the serious situation.  By profound changes in the nature of lower Puna, Pele has touched and altered many thousands of lives.

The Dalai Lama is fond of teaching that nothing is permanent. The situation in lower Puna illustrates that reality in both the immediate sense and also in the larger context of a constantly changing world. Natural catastrophes will play an even greater role in the world according to some climate predictions.

The cost and effort of responding to catastrophes and restoring mundane daily life must be expended.  In time, debates over the affordability of response and restoration may become politically significant as the number of catastrophic events increases.

In this instance, the outflow of the earth’s magma as lava that had been settled in the upper elevations (at Pu`u O`o since 1983 and more recently also at Halemauamu) was shifted by seismic events to the lower elevations in and around Leilani Estates.