A halo of light surrounds the world of the law. We forget one another, quiet and pure, altogether powerful and empty. The emptiness is irradiated by the light of the heart and of heaven. The water of the sea is smooth and mirrors the moon in its surface. The clouds disappear in blue space; the mountains shine clear. Consciousness reverts to contemplation; the moon-disk rests alone.

Empty Infinity from Richard Wilhelm’s translation of The Secret of the Golden Flower, a Chinese Book of Life

Yin and yang are a complementary duality found in nature (sky and earth, dark and light) depicted by the familiar symbol above.  The symbol has parts.  The first part is the circle, and within the circle a dividing line produces the yin and yang parts.

The circle is known as wu chi, representing awareness complemented with a sense of emptiness, a condition that does not involve mental fragments.  However, the active mind is satisfied by dividing wu chi for the purpose of describing separate perceptions.  The first division of wu chi produces yin and yang, representing universal complementary duality.

From that starting point, ancient sages defined characteristics of yin and yang in relation to the ten thousand things (that is, in relation to the multitude of separated parts that can be found to occupy the undivided wholeness, or emptiness, of wu chi.)

Details and descriptions of quintessential parts are foun

d in the I Ching, a classic text describing 64 gua, or images, containing six yao, or lines, representing yin as a broken line or yang as a solid line. 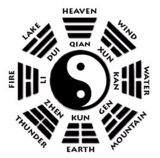 These 64 gua contain all possible permutations of yin and yang in a six yao structure and are themselves built from paired combinations of the three yao structures shown in the ba gua image to the right.

The I Ching’s detailed yet subtle analysis of yin and yang as found in natural conditions became a foundation for Chinese traditional arts and practices including medicine, ceramics, martial arts, cuisine, and many skills and crafts originally developed in earlier times. Plenty of material describes yin and yang in those contexts (it has been said that more than three thousand ancient Chinese scholarly works were based on study of the I Ching.)  As may be expected, this extensive material is not always consistent, various schools having developed differing views of how best to see and put into practice essential parts of their evolving nature.  Despite divergences of view and practice, the underlying concept of a cosmic complementary duality is the foundation of successful Chinese arts and practices that continue into modern times.

The progression of symbols from wu chi (an empty circle) to the 64 gua of the I Ching illustrates an ancient integrated science built upon a foundation of cosmic duality.

At its origin “consciousness reverts to contemplation [and] the moon-disk rests alone.” Then, rationally elaborating through the descriptive and analytical vehicle of yin and yang, the verses of the I Ching describe quintessential times and conditions one may experience (archetypes of life and human nature) and built upon that foundation are numerous competent and successful arts of traditional Chinese culture.